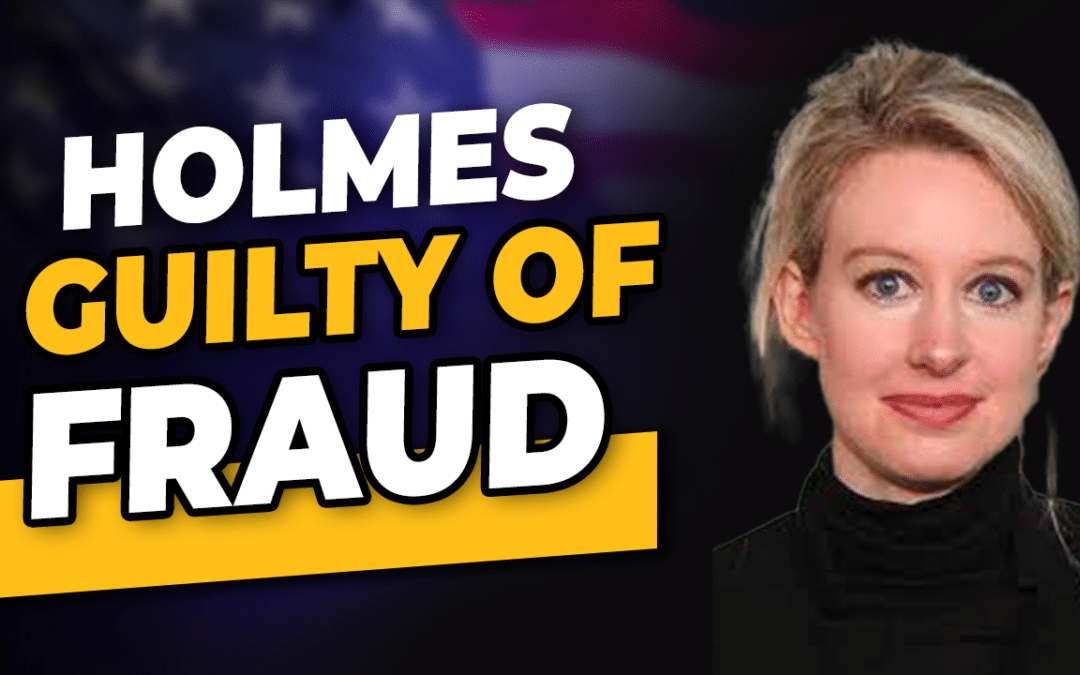 In a mixed verdict, the jury in the Elizabeth Holmes criminal fraud trial found her guilty of defrauding sophisticated investors of close to $150 million.

In the fraud trial of Elizabeth Holmes, the jury finally reached a verdict after deliberating for 7 days over several weeks. Holmes is the founder and CEO of the failed blood-testing startup Theranos.

The jury found Holmes guilty on 4 counts of wire fraud between 2010 and 2015, rejecting Silicon Valley’s accepted culture of greed, hustle, and overhyped technology.

The jury rejected Holmes’ claims that she could not have defrauded Theranos’ sophisticated investors or that they should have conducted better due diligence. Also, her allegations of abuse at the hands of Balwani (the Svengali defense) were not enough to keep them from convicting her on the four counts of fraud between 2010-2015.

The jury found Holmes not guilty on 4 other counts of fraud, the so-called patient fraud claims. This finding suggests they did not believe that Holmes intended to defraud or harm patients whose blood samples Theranos misdiagnosed. The patient fraud claims were significant as prosecutors sought to portray Holmes as having a callous disregard for the health and welfare of the public when promoting her company’s blood-testing technology.

Still, at sentencing, the Judge might consider what he heard from several patients at trial regarding their horrific experience with Theranos’ blood tests, which would not bode well for Holmes.

With some jurors apparently accepting the notion that Holmes did not intend to defraud early Theranos investors, the jury failed to reach the required unanimous decision on 3 fraud charges from before 2010. Those charges covered alleged instances of fraud that occurred early on, which suggests that at least one juror did not believe Holmes’ fundraising for Theranos was always deceptive or misleading.

Jurors did not speak to the media after the verdict

The jury’s impasse on fraud claims before 2010 may not have much impact as far as Holmes’ sentencing outcome. Having agreed that there was intent to defraud investors on Holmes’ part between 2010 and 2015, and convicting her on wire fraud and conspiracy to commit wire fraud during those years, that is sufficient for Holmes to face a statutory maximum prison sentence of 20 years.

For this reason, prosecutors are not expected to retry Holmes on the 3  fraud counts on which the jury deadlocked, although prosecutors have not announced a final decision on that. Had the jury convicted Holmes on those additional counts, her sentencing exposure would be roughly the same as it is now, under the US Sentencing Guidelines. As such, prosecutors have what they need to argue their case against Holmes at sentencing.

Holmes is expected to appeal her conviction. She remains out on bond pending further proceedings in the trial court. It is not uncommon for non-violent white-collar offenders to remain out on bond pending sentencing. A presentence investigation and a sentencing hearing will take place in the months to come.

Holmes’ co-defendant and former boyfriend, Sunny Balwani, is still scheduled to go to trial in February.

Did Holmes intentionally mislead doctors, patients, and investors as she raised investment capital and commercial partners?

The prosecution argued that she purposely deceived investors and others while knowing that Theranos’ blood tests were inaccurate and hiding that the company relied on third-party commercial machines. Holmes’ lawyers argued that she was a devoted entrepreneur who believed in her company and that her business failure was not criminal.

Holmes has always been vocal in defense of herself and Theranos after The Wall Street Journal exposed the company’s fraudulent business practices. She continued to defend herself throughout the criminal trial, ultimately taking the witness stand on her own behalf.

The trial played out inside a courtroom presided over by Judge Edward Davila of the U.S. District Court for the Northern District of California, where Holmes will face sentencing proceedings in the coming months.

Over the coming months, the following issues will play out for all to see:

In all likelihood, Holmes will continue to maintain her innocence and file a notice of appeal at the first available opportunity. With a trial record as extensive as this one, her legal team will look for any abnormality that may have factored into the jury’s conviction as grounds for appeal. Some legal experts suggest that Holmes could still now try to cut a deal with the government in exchange for giving up her appeal rights.

Will Holmes face the trial penalty or the trial tax?

After such a blockbuster trial and with the world watching, it remains to be seen how Holmes fares at sentencing. We do not know whether Holmes ever received plea offers from the government. Typically, defendants who choose to go to trial and are found guilty end up with a much harsher sentence than prosecutors offered during plea bargaining. No doubt, prosecutors will be gunning for the maximum.

Click here for helpful information on how a federal criminal defendant can prepare for sentencing and prison:

How To Prepare White Collar Defendant For Sentencing And Prison.

Will the government seek a retrial of Holmes on the three deadlocked counts?

Unlikely. As mentioned above, at least from a sentencing perspective, prosecutors have achieved what they need to argue to the Judge for the maximum penalty allowed by law.

How much federal prison time will Holmes get?

Judge Davila will sentence Holmes using the Sentencing Guidelines as a starting point. Her sentencing guidelines calculation will factor in her lack of criminal history but will also factor in a loss amount of over $100 million. The statutory maximum is up to 20 years.

Some people surmise that Holmes could get 80 years in prison, by multiplying 20 years for each of the four guilty wire fraud counts. That is unrealistic. The four guilty wire fraud counts relate to the same course of conduct and are typically grouped together for federal sentencing purposes. Put another way, even if she received 20 years for each guilty count, the Judge would most likely run the sentences concurrently, not consecutively.

Holmes and her team will present mitigating factors and ask Judge Davila for a downward departure. One thing for sure is that the public will continue to follow closely how Holmes prepares for sentencing and what her sentencing outcome will be.

What does Holmes’ conviction mean for Balwani?

Balwani faces trial in the coming months. Plea negotiations could ensue between Balwani and the government. However, what Balwani has to offer the government is unclear other than perhaps sparing taxpayers the cost and effort of another lengthy jury trial.

Will Holmes have to pay restitution?

Holmes will likely continue to maintain her innocence and file an appeal of the conviction. But the more immediate concern for Holmes should be her presentence investigation and sentencing hearing. She still has the chance to prepare for these events and influence the court to mitigate her sentence. Judges like to see criminal defendants accept responsibility and show remorse, which has proven to be a tall task for Elizabeth Holmes.

As a true believer in her company, Holmes has yet to admit that her technology did not live up to the hype even while she told investors otherwise. Let’s see if she does so now that the jury has spoken.