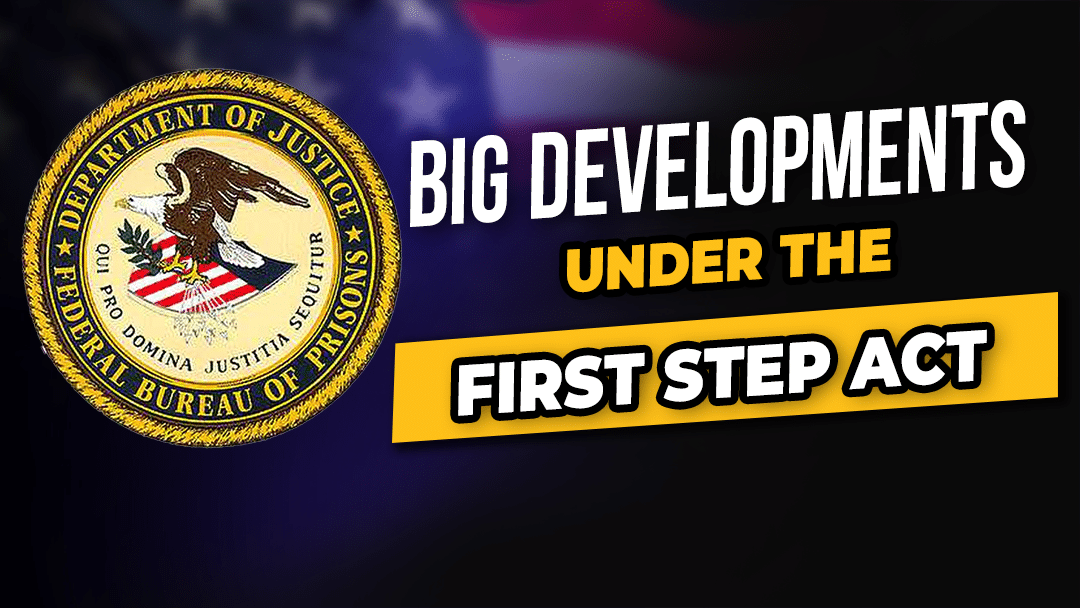 Thousands of federal prisoners began transferring out of federal prisons in the last week as part of the provisions of the First Step Act, the last sweeping criminal justice reform law in recent years.  The people getting released from prisons are going to supervised release programs, home confinement, or transferred into the BOP’s residential re-entry centers, commonly known as halfway houses. This was possible in part because the DOJ allowed the retroactive application of the First Step Act’s programming benefits.

In a rule published in the Federal Register last week, the Justice Department finally detailed how “earned time credits” for federal prisoners under the First Step Act will work going forward.  One of the goals of The First Step Act is to encourage people to participate in productive activities and programs to reduce recidivism. As an incentive, participation in such programs provides federal prisoners a pathway for early release from prison.  Implementation of this aspect of the law requires that the government define what activities and programs qualify as productive activities under the law so that inmates understand how to direct their efforts. It also requires that everyone understand how the government will calculate people’s earned time credits and how they can actually use them. The First Step Act provides people the opportunity to earn “time credits.” Specifically, people can earn up to 15 days for every 30 days they participate in specific prison programs believed to reduce recidivism rates.  Some of the programs available to earn time credits are anger management, money management, drug education, criminal thinking, and specific jobs and apprenticeships. But the Bureau of Prisons (BOP) never finalized how it would calculate people’s earned time credits and apply the credits towards early release from custody or probation.

The latest announcement of a finalized rule published in the Federal Register came on the heels of significant complaints about the BOP’s failure to implement the law as Congress passed it in December 2018.  In fact, the DOJ Office of Inspector General exposed the BOP’s utter failure to apply earned time credits for tens of thousands of people who had earned them by completing prison programs. To say the least, leadership has been missing at the BOP since Congress passed the First Step Act, and now the BOP Director has resigned from the post. Observers blame the staffing shortages plaguing the BOP for the significant delays in rolling out the earned time credits throughout the federal prison system. Staffing shortages reduce the number of people available to teach the classes and supervise the apprenticeships and jobs that help prisoners earn these time credits while incarcerated. The DOJ says the BOP continues to hire more people to address the staffing shortages.  Also, in recognition that there is a need to provide people with enough productive activities under the law, the DOJ now states that the BOP will increase the number of eligible programs. Significantly, the BOP also now states that it will not punish prisoners if they cannot participate in productive activities for reasons beyond their control.  To follow up its words with action, the DOJ began implementing the final rule when the rule was made public in the Federal Register.

This first wave of mass release from federal custody involves people whose earned time credits exceed the days remaining on their sentence, or who are 12 months or less from release and have a term of supervised release.   This category of people had their time credits calculated and applied first.  Their releases and transfers are underway. We expect thousands more releases and transfers as BOP staff apply the earned time credits to other prisoners in the weeks ahead.

The final rule resolves the central sticking point in the earned time credit debate, having to do with the question of how a person in prison earns a day of time credit, which can later become one less day in prison. The final rule now changes the BOP’s prior definition of a “day” of credit, which was unrealistic and impractical.  In January 2020, the BOP proposed that people needed to participate for “eight hours” in specific classes, programs, or jobs to qualify for one day’s worth of earned time credit. Criminal justice advocates, lawyers, and prisoners were outraged at such a proposal, which completely ignored the reality of how courses and jobs work in prisons.  Some days, a person inside goes to their prison job for 2.5 hours, 5 hours, or more; it varies widely from day-to-day. Staffing, prison count times, and other factors dictate how many hours a prisoner spends at work on any given day, primarily for reasons beyond their control.  Instead, the new rule rejects the “every 8 hours counts as a day” approach as “inconsistent with the goals of the law.” The team at Prison Professors has been saying this loud and clear: the goal of prison reform and the First Step Act has to focus on creating more, not fewer, pathways for people in prison to earn their freedom. The final rule unequivocally states that while in federal prisons, people will earn 10 days for every 30 days they participate in programs, and prisoners who can remain in lower-risk categories are eligible for another 5 days of credit every 30 days. Thus, lower-risk prisoners can earn up to 15 days for every 30 days they participate in programs and remain in good behavior.  Here is how the BOP now explains to prisoners what is a “day” under the final rule:

(Courtesy of Bop.gov.) This definition of a “day” is practical. It makes it easier for a wide variety of programs to count toward earned time credits and allows more people to be eligible for release earlier if they put in the work.  Of course, our team at Prison Professors overwhelmingly supports this approach as compared to the prior versions. Indeed, it is the only one that makes sense and is consistent with the language and spirit of the First Step Act. To be clear, the team Prison Professors does not advocate for handouts; we stand for proper incentives and rewards for people in the prison system who work to better themselves in every possible way.

The First Step Act Requires That BOP Do More

So while the final rule is a huge step forward, the DOJ and BOP must do much more to realize the full vision of the law, in letter and spirit.  Issues that need immediate attention include:

Under the First Step Act, PATTERN, the Prisoner Assessment Tool Targeting Estimated Risks and Needs, is a tool to assess all inmates to determine if they present a high, medium, low or minimum risk of reoffending. So far, the BOP’s efforts are lacking. In truth, the BOP has merely rejiggered its security assessment tool, which serves a different purpose, to measure people’s needs and risks of reoffending. That is inadequate. For example, according to many experts, security assessments tend to include racial bias. Responding to the initial wave of criticism, the BOP now excludes the age when a person was first arrested or whether the person was a self-surrender to prison. The current approach leaves many people behind. In addition, even with the BOP’s tweaks, experts believe that the PATTERN tool still has many flaws and racial bias. The final rule that DOJ just filed in the Federal Register indicates the BOP continues to evaluate the PATTERN tool with the help of outside experts. The statement adds that BOP is working to “take all steps possible to address and mitigate against racial bias or other disparities.”

While we at White Collar Advice and  Prison Professors are encouraged by these significant steps forward, the DOJ and BOP must do more. We encourage people in the prison system to take the bull by the horns and prepare themselves for productive law-abiding lives upon release. In order to maximize everyone’s chances to earn their freedom, the BOP has to consistently provide more programs and more access to programs that meet the criteria in the First Step Act.  Still, defining what is a day’s worth of earned time credit for people is a huge step forward, as evidenced by the thousands and thousands of people that suddenly qualify for early release based on their programming and other productive activities.