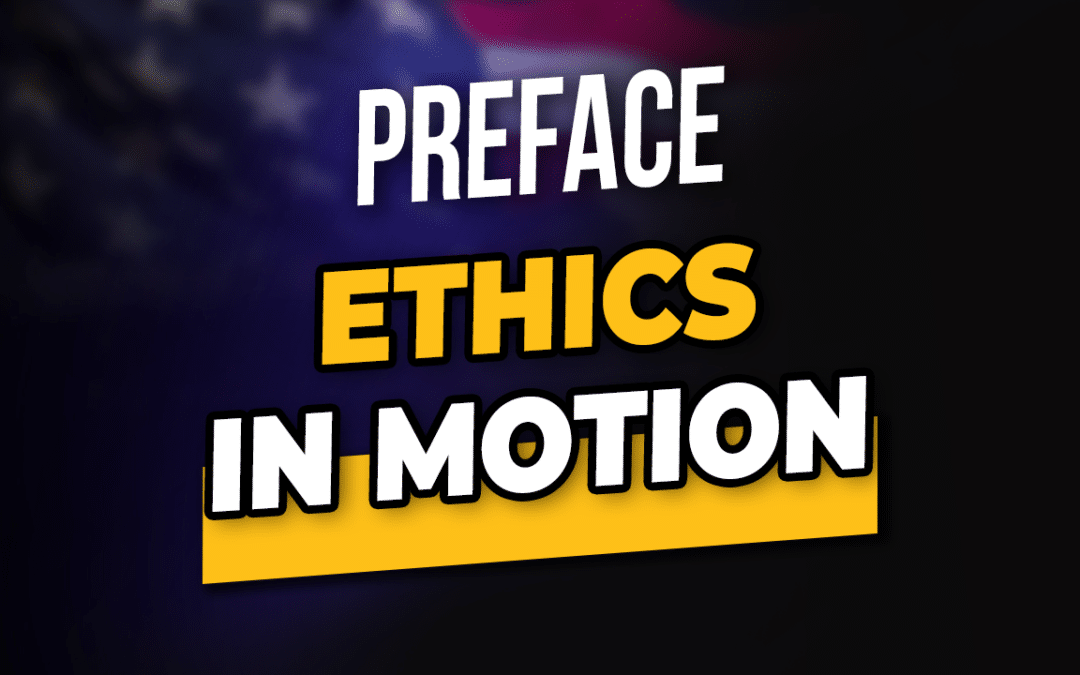 Preface To Ethics in Motion

Since I was a convicted felon, many would see an irony in my having authored a book on ethics. In fact, on 17 May 2010, I was summoned to appear before United States District Court Judge Stephen Wilson and the hearing reminded me of exactly who I was. I was not “a person” but “the subject” of that judicial proceeding, and the judge’s refusal to consider me as a legitimate source for any type of ethics instruction became patently clear. I had a duty to prove otherwise.

The purpose of my court hearing concerned an unexpected tax refund of $31,908.04 that I received from the IRS. I was released from prison on 20 May 2009, but I remained under the close scrutiny of Mr. Isaiah Muro, a U.S. probation officer who was charged with the responsibility of supervising my release. When I called Mr. Muro to tell him of the surprise refund I had received, he told me that he would request a ruling from Judge Wilson to determine how much of the refund I could keep and how much I would have to surrender to pay toward the financial sanction that was a part of my sentence.

Since I walked out of federal prison 362 days before my court hearing, Mr. Muro had a relatively long history of supervising me. He understood the career I was striving to build and I found him supportive, firm but fair in his supervision. On account of my full compliance and cooperation with every request he made, Mr. Muro extended me a higher degree of liberty that I would have expected while working through the terms of my supervised release.

At 11.00 am sharp on the day of my hearing, everyone in the ornate courtroom rose to honor Judge Wilson as he entered. He sat in his high-backed chair on the dais, then began to review documents Mr. Muro submitted.

“I’m not sure why we’re here.” Judge Wilson readjusted himself in his seat as he cut to the heart of the matter. “I don’t see how Paperny is entitled to any money. He doesn’t have any rights.”

Beong Soo-Kim represented the government and he responded to Judge Wilson. “The government is prepared to work out an equitable split with Mr. Paperny.” I welcomed support from the prosecutor. He proposed that the judge allow me to retain some percentage of the funds to pay off personal debts, to print copies of Lessons From Prison (a book I wrote during my prison term), and to promote my career as a speaker on ethics.
Judge Wilson chuckled. “He is a felon!” His voice boomed from the bench. “We need a lot of things in this world, but a felon speaking on ethics is not one of them.” The judge expressed contempt and doubts that my work could help anyone.

Joel Athey, the lawyer representing me, tried to argue on my behalf, describing efforts I’ve made to comply with my obligations and citing the six-figure amount I already had paid toward my commitment. The judge dismissed my lawyer’s arguments, interrupting him in mid sentence by saying he didn’t care about any efforts I had made to redeem myself. I was supposed to be broke, the judge said, to have nothing. As such, Judge Wilson ordered “the felon” to forfeit all funds other than the direct expenses associated with the preparation of my tax refund.

I understood Judge Wilson’s dismissal of me as a human being. Encountering resistance was a price I expected to pay—over and over again—for the remainder of my life. Because of my acceptance, such demoralization would not deter my efforts to reconcile with society; one contribution I could make was sharing what I have learned.

To that end I not only relied on personal experiences, I also studied and contemplated the work of others. In reading the writings of Plato, the great Western philosopher who lived more than 2,500 years ago, I accepted that the most important task for an evolving society was to teach those in our communities. Every citizen had a role to play in passing along valuable lessons.

I respected scholars and societal leaders like Judge Wilson. They were well suited to dispense wisdom and to show by personal example how making the right kinds of decisions engendered self-respect, dignity, integrity, and the embodiment of the best our enlightened society could produce. Yet I had a role too, and that role was to show the consequences that could follow bad decisions. I was the yin to their yang—or vice versa.

News sources reported daily about well-educated individuals who began their lives with privilege and high expectations. As I once did they led careers of promise. Through my work I could help them detect and avoid the toxic combination of pressure, rationalization, and capacity that threatened to lead values astray. I once lacked an appreciation for the power of such threats and temptations. As news reports confirmed, the same went for countless numbers of white-collar offenders who never thought they would face disgrace as they sat beside attorneys at defendant’s tables in courtrooms across America.

Despite my felony conviction (or perhaps because of it) I was positioned to show others how easily an ethical slide could lead down the chute of personal disaster and drop the transgressor into the iron jaws of the criminal justice system. Ethics in Motion would help to communicate that message.

The chapters that follow profile individuals who once led lives of distinction as professionals in the business community. I gathered their stories through consulting services I offered to people who were struggling through criminal prosecutions for mail fraud, wire fraud, tax fraud, tax evasion, bribery, and other white-collar type crimes. Despite their erstwhile perceptions of being morally upstanding citizens, they fudged on government forms; they participated in bribery or corruption schemes; they used the mail, the telephone, or the Internet to convey information that would mislead. Whereas they wanted to believe their actions did not represent more than indiscretions, their stories showed how such indiscretions derailed the promise of their lives. By neglecting attention to ethical development they made decisions that resulted in the loss of their careers, tearing apart their family’s stability, reputation, and dignity. Their profiles showed how easily bad decisions could lead a person into our nation’s growing population of felons.

Readers may work through the chapters in Ethics in Motion sequentially, but since each chapter stands on its own, a linear reading isn’t necessary. After describing my experiences, subsequent chapters show what I learned from others. They show how an executive decision to help a client, to advance the firm’s business, to close a deal, or to make things right resulted in their becoming targets of criminal prosecutions. Such profiles, I hope, will help those in my audience connect the dots. I want them to understand why it’s not enough “to know” that path to an ethical life. By passing along what I have learned I offer compelling reasons that show why individuals should commit to walking that path every day, with every decision in their personal lives and in their careers. They were lessons I learned the hard way.

To make no mistakes is not in the power of man; but from their errors and mistakes the wise and good learn wisdom for the future.
~ Plutarch