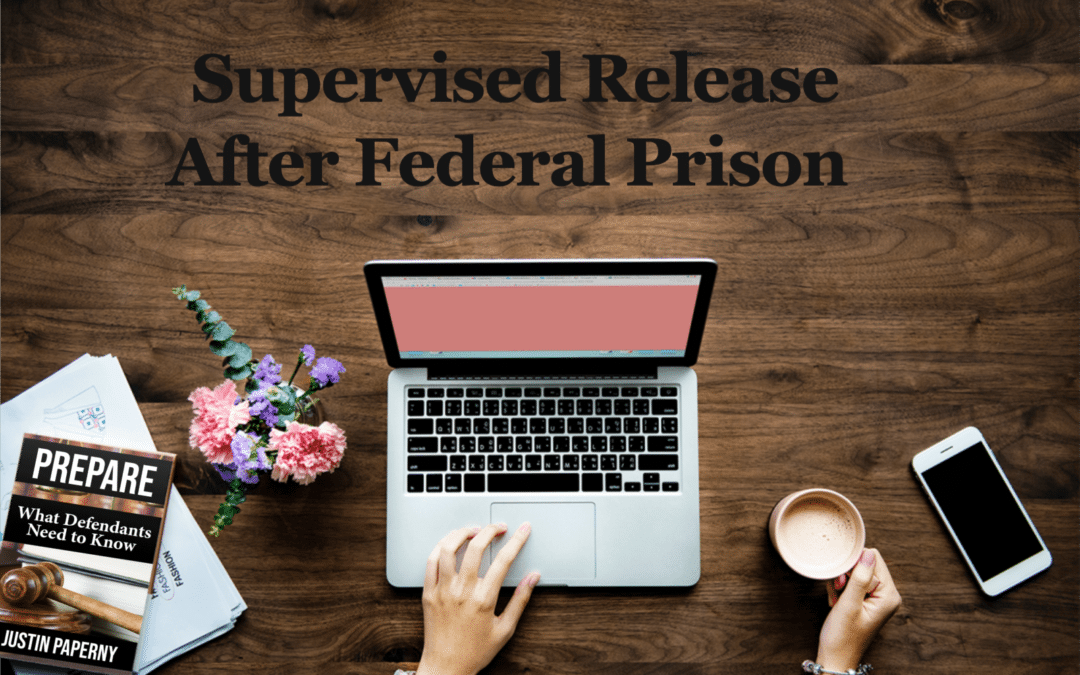 Unfortunately, liberty isn’t immediately restored for individuals who complete a federal prison sentence. In most all federal cases, judges impose a term of Supervised Release in addition to confinement and financial sanctions. When judges sentence defendants to Supervised Release, a federal probation officer will expect him to report to the U.S. Probation office within three days of completing the obligation to the Bureau of Prisons. The Case Manager at the halfway house or the prison will provide those instructions several months before the final day of the prison sentence.

Transitioning from the Bureau of Prisons to federal probation brings a massive shift in the quality of life for the individual. Administrators in the Bureau of Prisons focus on the culture of confinement. Rather than being concerned with an inmate’s plans upon release, administrators within the BOP will routinely say and show that their primary concern is to maintain security of the institution.

Once an individual completes his obligation to the Bureau of Prisons, however, his level of liberty increases substantially. The Federal Probation Officer who supervises his case will tell him that in contrast to the BOP, Probation strives to help the individual succeed as a law-abiding, contributing citizen. The initial months on Supervised Release may feel somewhat intrusive. But as long as the individual chooses to live in compliance with the rules set forth by the Probation Officer, the individual will adjust easily enough.

At White Collar Advice, we advise our clients not to let the details seem overwhelming. Interacting with a Federal Probation Officer while on Supervised Release is much less stressful than interacting with the Bureau of Prisons. And the process becomes easier as time passes, provided that the individual complies with the conditions imposed upon him.

Prior to the individual completing his obligation to the Bureau of Prisons, the Case Manager in prison will coordinate with the appropriate Probation Office. The Case Manager will provide a plan that includes the following information:

• Complete address where the individual will live while on Supervised Release.

• All of the contact information for the individual who will “sponsor” the individual, provided the individual is going to live with someone else. The Probation Officer will confirm that there are no weapons or drugs in the residence.

• The Probation Officer will either approve or deny the residence as being suitable based on the Pre-Release Investigation.

• No Internet sales or businesses

• No work in the credit industry

• No working for specific businesses or with specific individuals

1. The defendant shall not leave the judicial district without the permission of the court or Probation Officer.
o Below we offer more details on the travel rules for people on Supervised Release.

4. The defendant shall support his or her dependents and meet other family responsibilities;
o At White Collar Adcice, we’ve not encountered any clients that had trouble with this general condition.

7. The defendant shall refrain from excessive use of alcohol and shall not purchase, possess, use, distribute, or administer any controlled substance or any paraphernalia related to any controlled substance, except as prescribed by a physician.
o Probation Officers violate people on Supervised Release and return them to prison if they find a pattern of substance abuse.

8. The defendant shall not frequent places where controlled substances are illegally sold, used, distributed, or administered.
o Probation Officers will watch people on Supervised Release more closely if those individuals live criminal lifestyles.

9. The defendant shall not associate with any persons engaged in criminal activity and shall not associate with any person convicted of a felony, unless granted permission to do so by the Probation Officer.
o At White Collar Advice, many of our experts built careers by advising other felons how to recalibrate life in society. Since they were compliant with all rules imposed by their Probation Officer, they had authorization to interact with felons. But we’ve worked with clients that Probation Officers wanted to return to prison because of their romantic relationship with other people who had felony records.

12. The defendant shall not enter into any agreement to act as an informer or a special agent of a law-enforcement agency without the permission of the court.
o An individual should have guidance from competent defense counsel on issues that involve other law-enforcement agencies.

• People with whom he cohabitates

• Supervisor at place of employment

• Details on expenditures of more than $500

• Any interactions with law enforcement

• Any interactions with felons

With regard to financial information, the Probation Officer will require verification, such as bank and credit card statements. Further, it’s crucial to know that those monthly Probation Supervision Reports are legal documents. Once an individual writes the information and signs the form, criminal penalties become possible if the individual deliberately lies. See Title 18 United States Code, Section 1001.

• Statements from the US Attorney,

• Statements made at sentencing,

• The individual’s adjustment in prison,

• The individual’s history of violence,

• The individual’s history of substance abuse,

• The individual’s level of support in the community,

Federal Probation Officers will impose urine-testing conditions on individuals they identify as being at high risk for abusing controlled substances. Those who received the one-year time cut from RDAP will likely have to comply with those strict conditions for the first year of supervised release. The enhanced monitoring has a process as follows:

• The Probation Officer assigns a code and a phone number to the probationer.

• Every day, the probationer is instructed to dial the phone number and listen to the recording.

We’ve worked with clients who were successful in persuading their Probation Officer to release them from the intrusive urine monitoring requirements after six months. Other clients remained on the intensive urine-testing program during their first year of liberty from the BOP.

In addition to more intensive requirements for urine testing, those who participated in the RDAP program may also have to submit to counseling programs. Some clients of our clients reported that their Probation Officer required them to attend counseling sessions for courses that included:

While in the halfway house or on home confinement, the inmate did not have to pay for those counseling sessions. Yet once an individual finishes with the BOP, the Probation Officer may require the individual to pay for his training sessions. Those sessions can take a few hours out of each week and cut into the individual’s disposable income.

For individuals who owe extensive amounts as part of their financial sanction, the Probation Officer may demand financial information that is in addition to the monthly form described above. Some of that information may include:

• Signed release for Probation Officer to obtain a credit check.

Every U.S. Attorney’s Office has a “Financial Litigation Unit” (FLU). They may collect on a debt for 20 years after the judge imposed the financial sanction. When the judge imposed a prison term, that 20-year period doesn’t begin to count until after the individual has been released from the Bureau of Prisons. The FLU may garnish a portion of wages, garnish a portion of a spouse’s wages, garnish income tax returns, and put liens on personal property.

The Probation Officer will make sure that the individual knows that federal laws prohibit people who were convicted of a felony to own or possess a firearm. Being around firearms or ammunition not only subjects the individual to violations of Supervised Release, but new criminal charges that carry minimum prison terms of five years.

At White Collar Advice we can only speak generally about travel permissions. Each Probation Officer will make his or her own determination with regard to an individual’s suitability for travel. Individuals who owe financial obligations may have more difficulty obtaining permission to travel outside of the judicial district, except for employment reasons. One of our clients lived in California and he requested permission to visit his daughter in New York. The Probation Officer denied the travel request because the individual still owed a fine. Another client lived in Los Angeles and he asked permission to attend a Charger’s football game in San Diego, which is in a different judicial district. The Probation Officer denied the request, citing the outstanding financial obligation.

Probation Officers who choose to authorize travel requests will vary in how much notification they want. Some will only require a short email, with 24-hour notice to approve the request. Other Probation Officers may require the individual to complete a formal document, and provide at least two weeks advance notice. Those requests are specific for domestic travel. International travel requires permission from a Federal Judge, and individuals should budget at least one month to petition for such permission.

The information we provide above applies to individuals Probation Officers perceive as being compliant. If the Probation Officer believes the individual fails to comply with rules of Supervised Release, or is engaged in ongoing criminal activity, the level of scrutiny will increase substantially.

Once the Probation Officer files the Notice of Violation, the individual must appear in court. Sometimes the Probation Officer will order the U.S. Marshals to take the probationer into custody before the court hearing. Then the entire nightmare of dealing with the criminal justice system begins again.

At the first appearance, the system will have a formal reading of the charges. Then the Judge will ask the individual to either admit or deny the specifications. If the individual denies that he violated conditions of Supervised Release, he is entitled to a hearing. But the hearing is different from a court proceeding in a criminal case. Violations of Supervised Release are considered “civil” rather than “criminal” matters. As such, the burden of proof is much lower. In a criminal matter, prosecutors must prove to a unanimous jury that a defendant is guilty “beyond a reasonable doubt.” Obviously, that doesn’t mean beyond “all doubt.” Members of a jury can still have a little doubt and still convict an individual of a crime. But the evidence is supposed to be sufficient enough that a reasonable person would infer guilt from the evidence.

Early termination is rare. An individual who aspires to have Supervised Release terminated early should begin preparing at the soonest possible time to build a record that would strengthen his motion to be cut free from the federal government early.

• In what ways do you envision Supervised Release influencing your life?

• How do you anticipate your employer would respond if your Probation Officer wanted to speak with him?

• How are you preparing your family members for the complexities of Supervised Release?

• What steps can you take now to influence the way your eventual Probation Officer will treat you?

• What steps can you envision taking now to advance the possibility of your earning early termination from your term on Supervised Release?