What Religious Services are Available in Federal Prison? (Chapter 19) 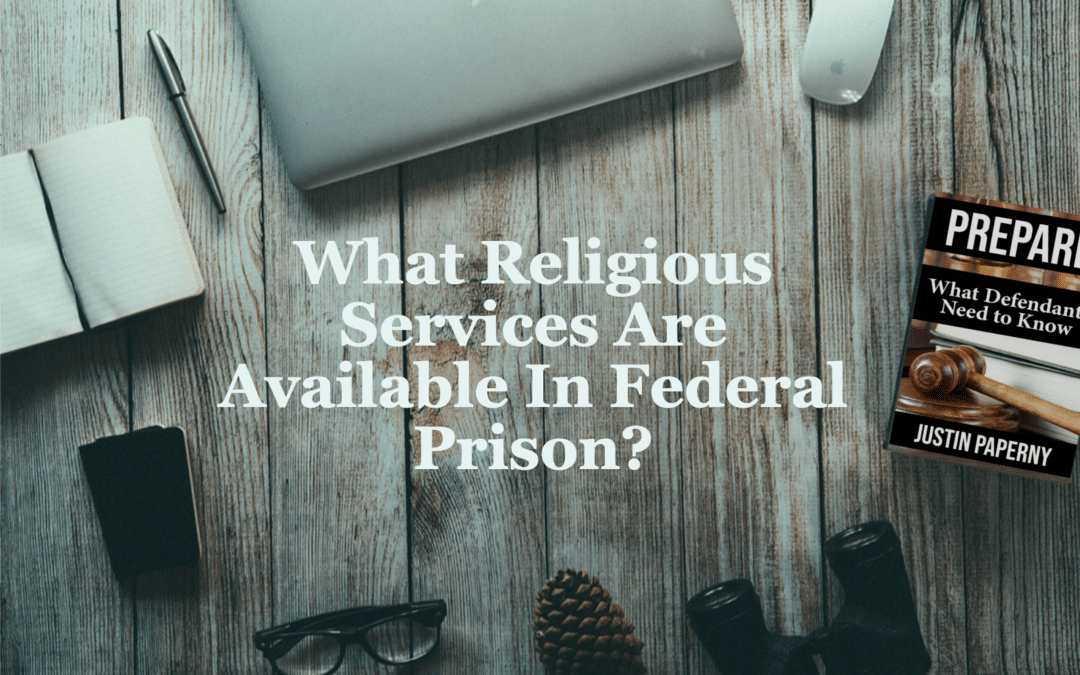 What Religious Services are Available in Federal Prison?

Religious services help many people cope with the challenges of confinement. To support religious programs, the Bureau of Prisons employs more than 200 chaplains. Besides the chaplains, approximately 10,000 volunteers and contractors support the religious programs. Ample opportunities exist for people in prison to worship and practice their religious faith.

Like all BOP employees, the chaplain “is a correctional officer first.” Keep this fact in mind during worshipping practices, because it’s not unusual for chaplains or rabbis to write disciplinary infractions. People should not expect confidentiality when talking with any staff member, or for that matter, with anyone else in prison.

Chaplains may be of any religious group, and it’s not unusual for a them to interact with people of different faiths. Christian chaplains, Jewish rabbis, and Islamic imams may lead worshipping services for any group.

The First Amendment of the U.S. Constitution guarantees all Americans the right to practice their religious beliefs. Prisons have limits, however. The BOP does not condone all worship religious services. Some Native American religions, for example, worship using the “peace pipe” and peyote in their services.

To be consistent with its commitment to policy, the BOP identified 31 different religious groups that it has authorized. Individuals who want to come together and worship must identify their religion as belonging to one of those groups the BOP recognizes. Regardless of group, all people in the prison can use the multi-faith chapel.

That main chapel serves as an assembly room for other non-religious programs that require seating for several hundred people. Additionally, the chapel building usually has several smaller rooms for religious groups that meet in smaller numbers. Besides using the chapel for prayer, many prisoners go to the chapel in search of silence. Chapels, like the education department, can be a respite inside the confines of a prison.

Chapels may also include a library that includes a variety of books that may be of interest to individuals of particular faiths. Some of those books are for reference only, and inmates are not permitted to remove them. Reading in the chapel is not a problem, though, as it usually has the most comfortable seating in the prison.

Chapels may have music room with a piano and an organ along with many other instruments. Groups meet to practice in the music room, and regularly perform during the religious services. The chapels also sponsor an audio-visual program, where video and audiocassettes of a religious nature are available.

Byron told members of our team that authorities arrested him when he was 19 for charges related to the distribution of cocaine. He received a 20-year sentence and felt like he was coping well, largely because of religious services. Prison didn’t bother him at all, he said.

Byron came from a large urban housing project and was no stranger to violence. He had been gang affiliated as a young man. When he started serving his sentence, however, he picked up a Bible. Although not religious prior to confinement, faith changed his life.

“I used to worry about my time. But once I picked up the Bible, it changed my whole outlook,” Byron explained. “I’ve been reading it ever since. Whenever I’m not working on my job, or exercising, I go to the chapel and participate in one of the religious programs. I’m there every day. On Sundays I’m active in the Christian services. On other days I’m either involved with a prayer group, a Bible-study group, or singing with the choir. Because of services in the Chapel, I don’t even feel as if I’m in federal prison. Ten years have passed since my arrest. For me, not one day has been wasted. I feel as though this is where God wants me to be. I’ve learned to put everything in God’s hands.”

Besides the regular Chapel, each federal prison provides an area for Native Americans who practice their spirituality in ways that are distinct from other organized religious groups. To show how the BOP makes an extra effort to accommodate all religious groups, we’ll provide detail of what the system makes available for Native Americans at some prisons where members of our team have been held.

Services for the Native Americans take place entirely outside, climate notwithstanding. Unlike most of the other programs sponsored by the chapel, the Native Americans make little use of a chaplain—prisoners and volunteers from the community basically conduct the services.

Generally, the area where Native Americans worship is immediately outside the chapel building, or near the recreation yard. They have a small fenced-in area, about 500-feet square. Native Americans who participate in the program meet in the outside area on Friday evenings to participate in what they call “The Talking Circle.” Those who pass through The Talking Circle ritual are eligible to sweat on Saturday, when the sweat lodge is put into use. Again, staff members need not be present for this gathering.

When not in use, the sweat lodge looks like a wooden, dome-shaped frame. It’s made of natural tree branches, about 10-feet in diameter, and less than 6-feet high. The lodge has a bare earth floor. Directly in the center, there is a pit about 30-inches in diameter and 12-inches deep. This is where the prisoners put the red-hot rocks (some people refer to the rocks as “the grandfathers”) when the sweat lodge is in use.

Early on Saturday mornings, people responsible for coordinating the sweat build a roaring bonfire outside of the sweat lodge with logs provided by the chaplain. When it’s hot enough, they place rocks in the fire. While the fire is being built, other people cover the sweat lodge frame with canvas tarps. On top of the tarps, they place many layers of wool blankets. When it’s finished, the lodge looks like a covered dome with a small opening. Guards would not be able to monitor what is going on inside the covered dome without entering, and it’s nearly pitch-black inside.

When the rocks are red hot, one prisoner will dig them out of the fire with a shovel—one rock at a time. He’ll carry the rock to the flap in the dome. By then, several Native Americans will be inside the dome. They usually have stripped down to a pair of shorts and sit on a blanket they place upon the ground. One of the people inside the dome will retrieve the rock from the shovel and place it in the dome’s pit; he uses a pair of animal antlers as tongs to grab and carry the red-hot rock. As the rock is being placed in the pit, all of the prisoners inside the dome yell, “Welcome grandfather.”

There is a method to the quantity of rocks that are brought into the dome. Once the appropriate number of red-hot rocks are inside, the flap of the dome is closed. Native Americans chant ritual songs appropriate to their service—and they sweat. It gets very hot inside the dome. Those participating say that they feel cleansed and elevated through the process.