What Should I Know About Prison Staff Hierarchy? (Chapter 11) 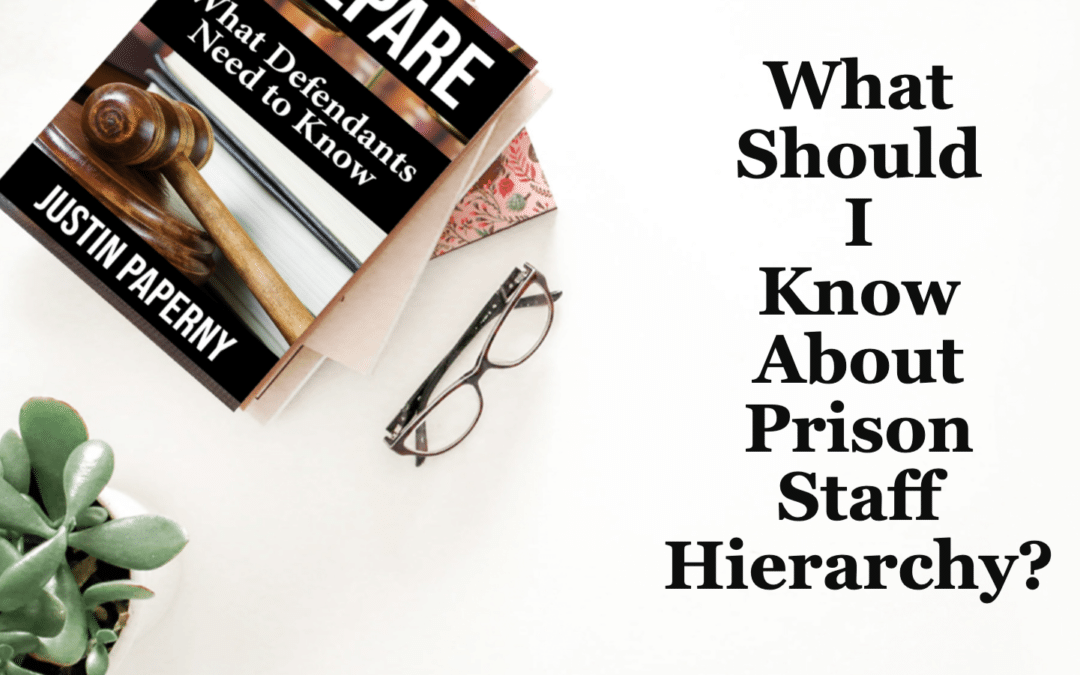 What Should I know About Prison Staff Hierarchy?

Navigating the bureaucracy of federal prison requires at least a cursory knowledge of the key players and their roles. This section provides a basic overview to consider for those going inside.

Like many law enforcement systems, prisons systems are modeled in a hierarchical formation. It’s bureaucratic to the max, governed by program statements at the national level, and policy statements at the local level.

The organizational hierarchy is clearly defined and completely different from anything in the private sector. Staff members refer to each other as Mr. This and Ms. That, as if first names are offensive. In many ways, prison life is comical in its absurdity, a world which Voltaire would have enjoyed satirizing.

Prison Staff Hierarchy: As stated previously, our team’s experience is with The Federal Bureau of Prisons, which is organized under the Executive Branch of Government. For those that need a quick refresher course in civics, we have three branches of government in our country:

• The Legislative System: Divided by two houses of Congress, the Senate and the House. They pass laws all citizens must follow.
• The Judicial System: Where judges interpret whether the laws have been applied appropriately.
• The Executive Branch: Administrators and functionaries of the government.

According to www.BOP.gov, in 2019 the federal prison bureaucracy includes 122 Bureau of Prisons facilities. Approximately 37,000 staff members oversee 184,000 people in prison. Obviously, such a huge system requires many rules and regulations. By adhering to those rules and regulations, they keep order. Those living inside can feel like cogs in a machine, without a common humanity.

Each region listed above has a single Regional Director. The regional director oversees policies and operations in each of the many institutions scattered around their respective territories. The various Directors of the Bureau of Prisons represent the highest levels of the BOP’s Executive Staff. Few prisoners have any interaction with them.

Occasionally directors tour the facilities. When they do, local staff exert great efforts to shield those leaders from interactions with prisoners. Prisoners can think of the directors as managing from the allegorical ivory tower. Although each director likely spent many years working in institutions, once they reach the pinnacle of the BOP bureaucracy, they isolate themselves from prisoners that lower level staff members interact with on a daily basis.

Each institution has its own chief executive. In most cases this position is called warden in the staff hierarchy. During our team’s extensive experience of serving time in prisons of every security level, we’ve been associated with multiple wardens. Each warden has his or her own management style.

The most effective wardens—from our perspective, manage by walking around. They make themselves available to talk with the people they’re responsible for confining. These wardens were present regularly during the serving of the noon meal, which is the most popular meal in every prison where we’ve served time. Wardens call it standing mainline, referring to the prisoners who wait in the long lines for their daily meals. All prisoners are free to approach the warden, or any of the other staff members who stand mainline, to discuss a grievance or an issue of importance to the individual.

Many federal prisons are located within complexes that include several institutions of different security levels. Those complexes may have multiple wardens. Each institution has its own warden. But there would also be a complex warden, that oversees the entire complex. For example, the Federal Prison Complex in Colorado includes the following institutions:

Most federal prisons hold in excess of 1,000 men. Some wardens are in control of institutions with more than 4,000 men and several hundred staff members. As the chief executive officers of these institutions, wardens have several colleagues beneath them on the organizational chart that manage various aspects of the prison.

The associate wardens, too, frequently stand mainline and make themselves available to speak with inmates who are concerned with departments under AW control. All members of the bureaucracy observe the clearly-defined chain of command, and associate wardens usually direct prisoners to seek assistance from staff members a bit lower in the bureaucratic hierarchy.

With individual prisons holding well over a thousand men together, it would be impractical for the warden to know each of the prisoners under his control. Each federal prison, therefore, uses the Unit Management System. By assigning people to smaller, more manageable groups within the prison, the system keeps better control. The group of staff members with whom prisoners have the most frequent contact (except their immediate work-detail supervisor) are those who serve on their unit team.

On a typical prison compound (USPs, FCIs, and FPCs), the prisoners are free to mix in the general population. They eat in the same chow hall, participate in educational programs together, and share the same recreational facilities. Each inmate is assigned to a particular housing unit. Those housing units are restricted and considered off limits for people assigned to different housing units.

Each housing unit is led by a Unit Manager. The unit manager is a department head that presides over case managers and counselors—the other members of the Unit Team. BOP Program Statement 5321.07 tells us that the unit team is also supposed to include an Education Advisor, and a Unit Psychologist. In our experience, those staff members have minimal interaction with people on the unit team.

When staff members activate programs within the First Step Act, case managers will document progress that prisoners make toward program completion. Those completions will result in “Earned Time Credits,” which they can redeem through various undefined incentive programs that should include transfer to home confinement.

Contrary to the title, counselors do very little in the way of counseling. Rather, their duties include overseeing the visiting lists and prisoner work details. They also may have a role in monitoring compliance with the Financial Responsibility Plan, assigning quarters, overseeing the sanitation of the unit, taking care of package mailouts, and participating on the Unit Disciplinary Committee.

Team Meetings in Federal Prison: Federal Prisoners who have more than two years remaining to serve are scheduled to meet with their unit team members twice each year. Prisoners with fewer than 24 months to serve meet with their unit team members more frequently. Usually, the prisoner’s unit manager, case manager, and counselor are present during these team meetings.

People in prisoners shouldn’t expect to learn much during these routine team meetings. Although rules may require attendance in team meetings, there is not much interaction or guidance with regard to what steps people can take to improve their status.

During the meeting, the case manager verbally reads for everyone present whatever documentation the unit team has accumulated since the previous team meeting. This documentation may include the prisoner’s work performance rating; his disciplinary record; his progress on the FRP plan; and whatever programs the prisoner has completed.

Newer prisoners in the system may feel let down after a team meeting. They come into the meeting with hopes that they will find some meaning as to what they are supposed to be doing in prison. To many staff members, the only matters of importance include the passing of time, the avoidance of disciplinary problems, and the payment schedule toward the FRP plan.

The counselor’s function during the meeting is to describe the prisoner’s participation in the FRP program, and passes the prisoner a copy of his visiting list. The unit manager asks the prisoner whether he has any questions or requests. In most instances, the Team Meeting lasts fewer than 10 minutes.

Although the applicable Program Statement indicates that the “Unit Manager is responsible for coordinating individual programs tailored to meet the particular needs of inmates in the unit,” and that “such programming often is highly innovative and complex,”

Our experience has not shown that to be the case.

Prisoners who are determined to grow must become resourceful. They should become skillful at finding opportunities to do so on their own. They should anticipate some level of interference from staff members who view any type of activity that is “highly innovative and complex” as a threat to the status quo. The BOP reveres uniformity.