What Should I Know About Disciplinary Infractions In Federal Prison? (Chapter 13) 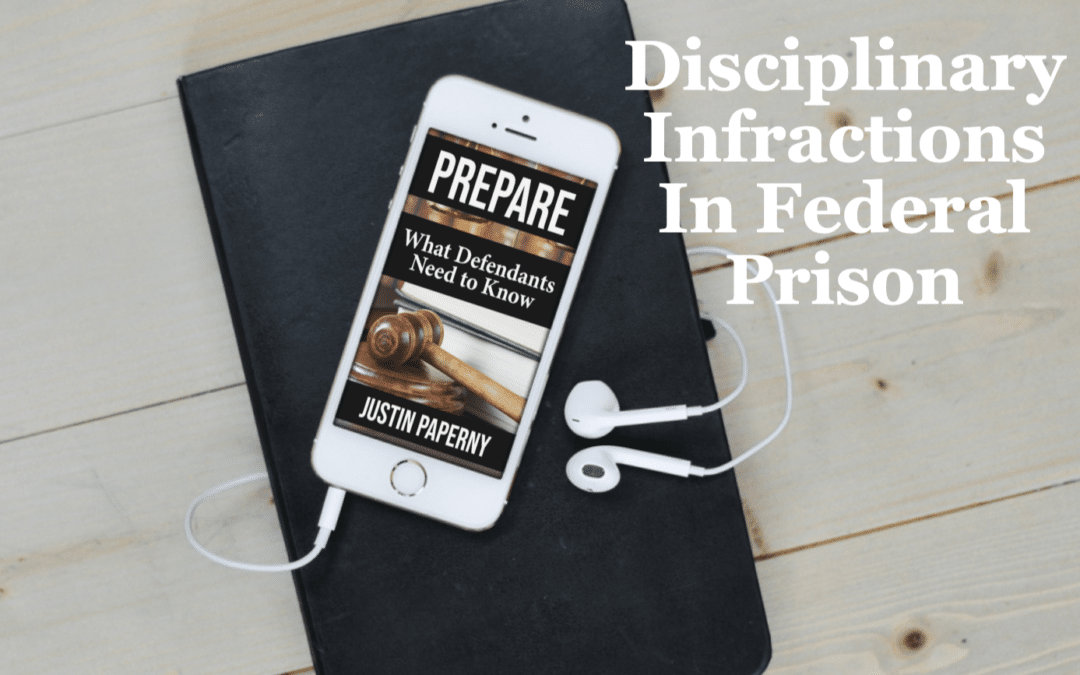 What Should I Know About Disciplinary Infractions In Federal Prison?

The BOP considers all employees correctional officers first. Any staff member, including secretaries, cooks, chaplains, and landscapers have the authority to write disciplinary infractions.

In federal prison, the informal name for infractions are “shots.” When a prisoner receives an infraction, it’s known as getting a shot.

Whenever a prisoner comes into an institution, staff members will issue him a handbook that details all prohibited acts.

There are four levels of prohibited acts or disciplinary infractions, categorized as:

According to BOP policy, a staff member who chooses to write a disciplinary infraction must file the shot within 24 hours of the time that the staff member became aware of the incident. If there are exceptional circumstances, the staff member may delay. But that delay could be grounds for the person to appeal, if it is out of time.

If the prisoner intends to contest the disciplinary infraction, he must be aware of the procedures.

The only opportunity he will have to call a witness will be at this “investigation” stage. If he fails to call a witness, or present any other exculpatory evidence at this stage, staff members may refuse to consider the evidence. Silence, incidentally, likely will lead a lieutenant and others to infer guilt.

Representatives from the prisoner’s Unit Team, ordinarily, are supposed to call the prisoner for a Unit Disciplinary Committee Hearing (UDC) within 72 hours from the time that the lieutenant processed the shot (not counting weekends or holidays). The UDC is the first stage of a court proceeding.

Case managers or unit managers on the UDC are authorized to provide a hearing for 300- and 400-series infractions. The UDC may also dispense sanctions for these low and moderate infractions. The sanctions may include loss of telephone, visiting, commissary, or a combination of privileges.

During that UDC hearing, a counselor, case manager, and or unit manager will listen to the prisoner’s version of events. They will then make a finding—guilty or not guilty.

Indeed, prison disciplinary hearings are as close to the infamous kangaroo court as is known in America. Prisoners may not cross-examine their accusers; they have no rights to discovery; and since prison administrators must maintain the order of their institutions, the word of a staff members is given more weight than the word of a prisoner.

Prisoners should expect the UDC to find them guilty if a staff member writes a shot. They may appeal the shot through the Administrative Remedy Procedure.

If the prisoner receives a serious shot of the 100- or 200-series level, he must appear before the Disciplinary Hearing Officer (DHO). All infractions involving the telephone, too, must go before the DHO.

The DHO hearing is like the UDC hearing, but punishments are much more severe. Rather than losing simple privileges, the DHO may sentence a prisoner to segregation for several months at a time. He may take away telephone, visiting, and commissary privileges for ten-year terms (or longer). He may extend a person’s stay in prison by taking away accrued good time. No corporal punishment exists in today’s prison system, but there is no shortage of psychological punishments at the DHO’s disposal. Prisoners whose actions violate laws may be referred to the FBI for prosecution, too.

Summary:
1. Shots begin when a staff member writes a formal infraction and files the disciplinary infraction with the Lieutenant’s office.
2. A lieutenant reviews the shot, then calls for the prisoner to appear before him. The lieutenant provides the prisoner with his only opportunity to make a statement or present evidence that could lead to further “investigation” by the lieutenant.
3. In most cases, the Lieutenant will refer the shot to the Unit Disciplinary Committee, and those on the committee will adjudicate the shot.
4. The prisoner may or may not be taken to segregation immediately upon the issuance of the shot, depending on its seriousness.
5. And prisoners should be aware that it may be easier to find a four-leaf clover in a field of hay than to overturn a disciplinary infraction once a shot has been written.

Further, if an individual is found guilty of fighting, the BOP will consider him a violent offender. That distinction will adversely influence his custody scoring for the remainder of time he is confined. Again, few opportunities exist for a prisoner to distinguish himself positively, there is no limit to the number of ways he can make his time in prison more onerous.

The Segregated Housing Unit (SHU), also known as “the hole,” usually is contained in its own building within the prison fences. If we think of prison as a miniature city, we can think of SHU as the equivalent of a county jail.

When staff members send prisoners to SHU, the prisoners lose access to many of the privileges available in the general population. Those in SHU, for example, are restricted to their closet-sized rooms for 23- to 24-hours each day. Sometimes they are alone. More often than not, they’re crammed into crowded conditions. They may be locked in the small quarters with one or two other prisoners (one may have to sleep on the floor).

Time in SHU exacerbates the pains of imprisonment. Some prisoners who remain in SHU for prolonged periods of time sometimes complain of becoming disoriented. There are few opportunities to interact with others. It’s difficult to escape the noise that others generate. Many of the prisoners try to relieve their boredom of being locked in the small rooms by banging on the doors or yelling through the spaces in the door jamb to others on lockdown. Some seek attention by stuffing their clothing into the toilets, then repeatedly flushing the toilet to flood the tier. It’s a pathetic attempt to frustrate the guards and garner attention.

Prisoners may be sent to SHU for any number of reasons. The obvious reason is as a sanction for having been found guilty of violating a disciplinary rule. A less coherent reason is for “investigation.”

Each prison has its own Special Investigative Services (SIS) lieutenant. The SIS operates as a kind of FBI agency, or group of detectives within the prison. They may launch investigations for suspected violations of prison rules or policies.

The SIS investigates wrongdoing, or suspected wrongdoing, among inmates and staff. SIS lieutenants may learn of activities they want to investigate through any number of methods, including “shakedowns” of personal property that result in incriminating evidence.

SIS lieutenants get most of their information, we suspect, from the many informers in the inmate population. In order to get some type of personal benefit, they may tell officers about illicit activities. For example, someone may tell of a prisoner that operates a gambling pool; of a group of prisoners who are extorting weaker inmates; of someone who steals; or of staff members who are bringing contraband into the institution. Such information may result in an SIS investigation. The SIS may place suspected prisoners under administrative detention (AD) until the investigation is complete.

The SIS may hold an individual in AD for several months. While under the AD status, prisoners live quite similarly to those who are being punished for having been found guilty of committing disciplinary infractions.

Besides investigations, prisoners may be held in the AD ward of the SHU for a number of other reasons. One reason may be the prisoner’s own request. Some prisoners feel so threatened in the general population that they choose protective custody (PC), and voluntarily live under the more spartan conditions of SHU.

Prisoners also may remain in SHU while they wait for room to become available in the general population, or while they wait for information regarding their classification. It is unfortunate, but in some cases, a prisoner arrives at the prison before his PSR or other paperwork. When that happens, out of an abundance of caution, staff members may put the individual in SHU until the necessary paperwork arrives.

As a large and growing bureaucracy, the Bureau of Prisons is a highly structured organization. It is exceptionally impersonal. Prisoners should prepare themselves mentally for the challenges that accompany confinement. Awareness can lead to the avoidance of disciplinary problems.

Despite the rigidity, opportunities for growth exist. In order to harness those opportunities, our team recommends that people make themselves aware of every rule. Learn how to navigate rules like a skier slaloms a course down a snow-covered mountain.

In our course, we offer more insight into stories of people that went through prison and emerged successfully. Anyone that chooses a disciplined, deliberate path can do the same.