What Do I Need To Know If I Am Under Investigation? (Chapter 1) 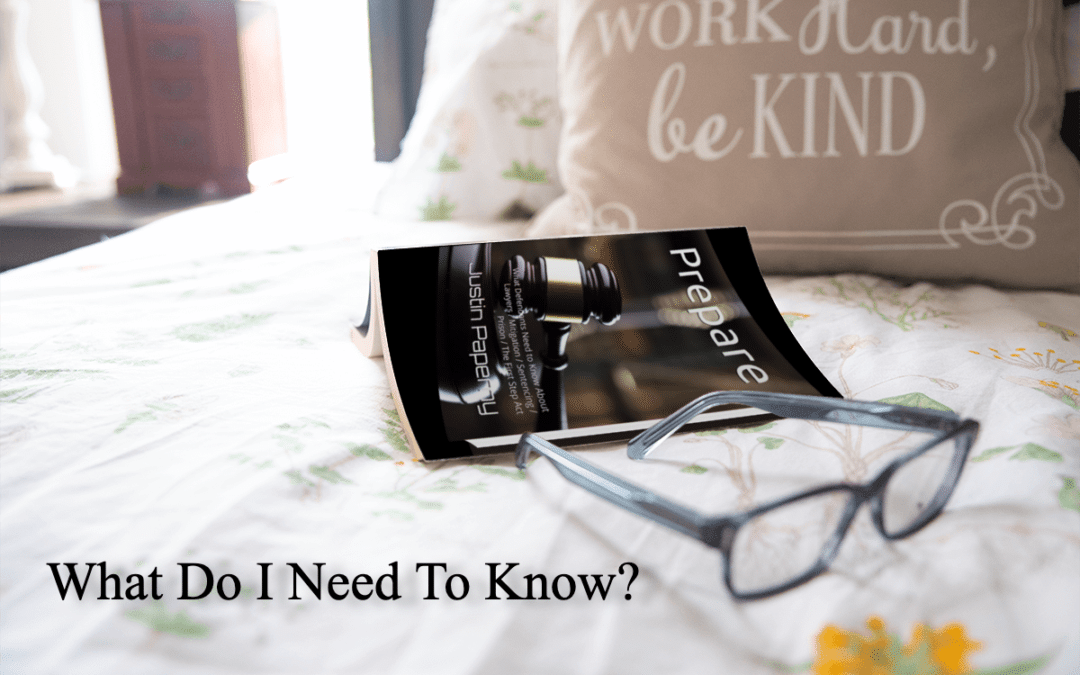 Chapter 1 Prepare: What do I Need to Know if I’ve Become the Target of a White Collar Criminal Investigation?

Our answer to the first question is simple: A lot!

Many people that face law-enforcement challenges make decisions that exacerbate their problems. They don’t mean to make troubles worse. Yet if they don’t understand what’s coming, what options they have, or where to turn for information that will help them make better decisions, they’re vulnerable.

Targets of government or criminal investigations can unwittingly talk themselves into a criminal indictment. They may eliminate opportunities for a diversion from prosecution. Or they may expose themselves to tougher sanctions.

Competent legal counsel is essential. But if an individual doesn’t have any experience with the criminal law, a primer on the system may be of help, too. With more knowledge, a layman will feel more competent when working with a criminal lawyer. Without knowledge, a person will always feel as if he’s operating from a position of darkness, never knowing what’s around the next turn.

By learning about the criminal justice system, a person can arm himself to work more effectively with lawyers. He may understand how to resolve complex dilemmas better. Although he may not like the limited choices available, he may feel more confident that he is going to make the best possible choice. When a person understands context, opportunity costs, and ramifications that follow each decision, that person empowers himself.

We can paraphrase an old Chinese proverb: If you want to know the road ahead, ask someone that has come back.

When under the spotlight of a white collar criminal investigation, it makes a great deal of sense to invest time and energy to learn. By learning, a person can make more informed decisions. Operating without knowledge makes us feel as if we’re hanging from a string, as if we’re marionette puppets. To stop that helpless feeling and restore confidence, we need to learn, then we need to make deliberate decisions that will influence best-possible outcomes.

Acquiring knowledge and becoming more literate about the system is a first step. As the cliché holds, the greatest fear is the fear of the unknown.

This book will be a great place to start.

Defendants learn quickly that problems with the criminal justice system can lead to enormous costs. It isn’t only money that’s at stake. Liberty is at stake. Future earning power is at stake. Collateral consequences—like access to banking, housing, career opportunities—can linger for a lifetime. Don’t take our word for it. Easily verifiable statistics show the fallout for those who have been targeted by the criminal justice system.

It’s crucial to prepare, and it makes a great deal of sense to learn.

The learning process begins with the reality that many people get sucked into the criminal justice system. Although going through the system is difficult, there are best-practice ways to prepare.

According to a 2019 report by the Prison Policy Initiative, the American criminal justice system holds almost 2.3 million people. They are confined to:

Not everyone that goes into the system gets the best outcome. Those that learn more can prepare more. By learning more about the system, they may be able to put themselves into a different algorithm, framing possibilities for a better outcome. By using good critical thinking skills, targets or defendants may influence decision makers to view them through a defendant lens, as if they’re fellow human beings rather than cogs that must grind through a criminal justice machine.

All people facing challenges with the criminal justice system share common traits. Their family members, friends, and colleagues care about them. Defendants would like investigators, prosecutors, probation officers, and judges to see them as normal citizens. They may have been charged with a crime, but defendants, like all people, have many attributes that are reflective of their character. A crime may be an aberration, a one-time act that is contextual and doesn’t resemble how they would act in most circumstances.

Yet once the criminal justice system targets people for prosecution, stakeholders in the system turn their attention to the alleged criminal wrongdoing. A criminal charge can stop stakeholders from looking at an individual as a human being. In an instant, the person becomes a defendant. The goal, or objective is not always justice. It’s a conviction followed by a punitive sanction.

Obviously, targets of a white collar criminal investigation would like to find some type of diversionary program to avoid federal or state prosecution. If they’re prosecuted, they want the best possible outcome. For most people, the best outcome means the least restrictive or least punitive sanction—preferably a sentence that does not include incarceration.

But how does a person go about getting the best outcome? Unfortunately, statistics show that few people that encounter the criminal justice system know how to position themselves for the best possible result.

My name is Justin Paperny. I’m the director of White Collar Advice, a company that I created with my business partner, Michael Santos. Michael made bad decisions when he was in his early 20s. He sold cocaine. As a result the bad decisions he made, a judge sentenced Michael to serve a lengthy prison term. He started serving his sentence on August 11, 1987 and he didn’t complete his prison term until August 12, 2013. He was a prisoner for 26 years, and he served time in prisons of every security level.

Despite multiple decades in prison, Michael led a productive life. He earned a bachelor’s degree from Mercer University and a master’s degree from Hofstra University. He published several books to help others learn more about the criminal justice system, as well to teach strategies others can use to emerge successfully. Since concluding his prison term, Michael has launched and built several businesses, and he’s always been a resource to me.

I’m a graduate of USC, and a former securities broker. I made bad decisions in my career, which led to my conviction for violating securities laws. While incarcerated, I met Michael Santos and we began working together. I authored two books, including Lessons from Prison and Ethics in Motion. Upon my release from federal prison, I began building a career around all that I learned, and authored a third book, Living Deliberately. Through our consulting firms, I’ve interacted with federal judges, prosecutors, defense attorneys, and more than 1,000 people that have experienced the criminal justice system. I’m a public speaker, a reputation management consultant, and an expert on rebuilding after struggle.

Through our various websites and social media platforms, we offer products, courses, and services. When people anticipate that authorities may target them for prosecution, members of our team can help. Although we don’t offer legal advice, we’re well connected with lawyers and law firms that can help. Those looking for guidance on post-conviction matters, including sentences and appeals, may want to connect with our colleague Shon Hopwood at Hopwood Singhal Law Firm. Each of us has extensive experience in going through the system and getting best outcomes. Together, we help people that want to help themselves. Anyone who is in the unfortunate position of being targeted by criminal investigators would do well to learn more.

As Yogi Berra said: If you don’t know where you’re going, you’ll end up someplace else.

Relatively few Americans have more than a basic understanding of our nation’s criminal justice system. On the surface, people know that law enforcement officers arrest people, prosecutors bring charges, and some defendants who are convicted go to jail or prison. Yet the system is much more complicated than that, with many moving parts.

Targets should begin from the premise that the system has one function: to protect society. It has a series of procedures designed to enforce the laws of this country.

As citizens, we’re all charged with the responsibility of abiding by our nation’s laws. Legislators pass the bills and heads of state sign the bills into law. It’s the criminal justice system that is responsible for enforcing the laws.

Few people understand that our country has 53 separate criminal justice systems, including one for each state, one for the District of Columbia, one for the military, and one for the federal government. Within the different systems, there are hundreds of jurisdictions, each with a series of trial courts that make findings of fact. Higher courts may review whether trial courts followed accepted procedures.

This elaborately complex system has evolved over hundreds of years. For a person that enters the system, it can feel like he’s been dropped into a byzantine labyrinth, with so many turns and dimensions that make it easy to lose direction.

To put this into perspective, think of the system as a zero-sum game.

We use the metaphor of a game for clarity, not to trivialize the conflict between accused and accuser. Defendants are the opponents of investigators and prosecutors. Both sides want to win. The defendants want to be diverted from prosecutions, acquitted, or receive the least restrictive sanction. Law enforcement officers want to convict. Prosecutors want to ensure that the defendants receive what they deem as an appropriate sanction.

In this “game” of criminal justice, the judge acts as a referee. Judges strive to ensure that both sides of the game adhere to the rules, or due process. They must follow established procedures within the system. In some instances, juries will determine the outcome of this game. But in most cases, defendants will plead guilty before a judge. Then, the long game begins, with post-conviction proceedings. They include a pre-sentence investigation and a sentencing hearing. Classification processes follow. For some, the next step includes appeals, imprisonment, supervised release, and all of the collateral consequences that stay with the “felon” class.

The sooner a target, or a defendant starts preparing, the more influence that person can have on a better outcome.

As Mick Jagger sang, we don’t always get what we want. But if we try sometimes, we just might find, we get what we need. To get what we need, we must work with a criminal defense attorney. And the more we know about what is to come, the better we prepare ourselves to help our lawyers get us the best outcome. For example, if we know what follows in federal prison, we may be in a better position to understand the impact of a plea agreement, or a prison term. In all cases, knowledge can help us make more informed decisions and restore confidence.

In the next chapter, we’ll cover some thoughts to consider when working with a criminal defense attorney.

Justin Paperny
P.S. Click here to schedule a call with me.