Be Careful In Federal Prison If You Have Type A Personality 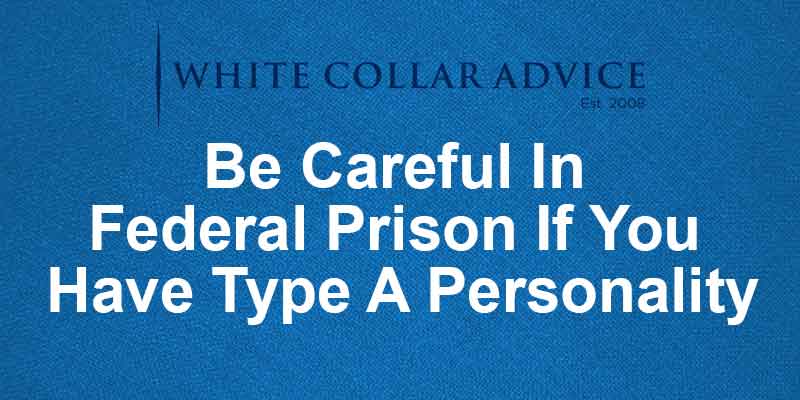 While walking through the Farmers Market today with my family I received an interesting text message. It said, “ Dude, I’m crazy Type A. I’m going to federal prison in October for mail and wire fraud. I am afraid my intensity and competitiveness will rub people the wrong way. I do not want any drama, but cannot waste this time. Can you talk? Can my wife join our call? Oh yeah your videos(insert swear word) rock.”

In my books, Lessons From Prison and Ethics in Motion, I have written extensively about the importance of understanding your tendencies. Are you a pleaser, are you tough to reason with, arrogant, easy to influence, do you need constant affirmations or kudos? Or more germane to this blog, do you have a Type A personality?

Now to this person’s credit he is fully aware of his personality traits. But will he be able to control himself when a situation presents itself in prison? Being aware is just the start. After all how many of us know or aware of something we shouldn’t do, yet we do it anyway? I knew demolishing that chocolate croissant at the Farmers Market was a mistake, but I ate it anyway. Implementation is the key.

I served time with a number of Type A people in federal prison. One of them included a doctor from San Diego.

This doctor used to freak out because four prisoners never seemed to show up for work. He would go irate, questioning their integrity, while asking again and again why the onus was on him—all of us—to do their jobs.

One afternoon the guard overheard the doctor’s lamentations and asked, “Who is not working right now who is supposed to be working?”

“Um, no one. We are all here,” the doctor was trying to back peddle, while I was acting like the figurative monkey who saw and heard no evil—the same sort of behavior that led me to Taft Federal Prison Camp.

“We will see,” the guard pulled out his clipboard and did roll call. Some guards do a roll call at the beginning of a shift, but most do not. Four prisoners who were supposed be to working were not there. The guard paged them. The doctor was nervous.

“So, who is the snitch?” a prisoner also known as Big Homie asked as he walked in.

The rest of this doctor’s journey was not as productive as it should have been, especially with the urine he found in his sheets several days a week. I later learned some prisoners urinated in a bucket and they poured the urine in his sheets before the 4:00PM census count.

When I got home from the Farmer’s Market I goggled Type A personality. The traits matched this doctor I worked with in the kitchen in many ways.

Type A individuals are:

1: ambitious: This doctor woke early, exercised hard, and wasn’t afraid to talk about how he would re build his life after prison. He was sharp.

2: anxious: This doctor would pace frantically before the doors would open for chow in the morning. He would pace in a similar fashion before visitation, too. That was more understandable. He struggled to relax.

3: competitive: This doctor was in his late 50s, but he looked as if he could have been 45 years old. He loved to play basketball. I even watched a game once. He was very good. When he made a good shot he loved to say, “that just happened,” which I was told was a quote from a Will Ferrell movie.

4: workaholics: Since this doctor was in my dorm, I saw his work ethic. I saw it because I worked as hard or harder.

5: hostility: This doctor was always on edge, especially on commissary days when there was a chance there would be no more apples or bananas.

Some days he would say, “Well, I wonder whether imbecile 1, 2, 3 or 4 will make it here today or show up on time. By the way, why don’t you get angry when you have to do their jobs?”

“Bud, it is all good. I am only going to worry about myself. Concerning myself with others is not my business. In fact, please do not ever ask my opinion on this again. I won’t respond.”

I encourage others going to prison to respond the same way when asked to comment about others.

Now back to the gentlemen who sent the text message. I spoke with his wife and him a little earlier.

A few minutes into our call I asked his wife, “Tell me how your husband has a type A personality? I mean does he really have one?”

“You kidding?” she said half jokingly. “Here is a stupid example, but it happens. My iPhone tells you whether I have read a text or not. If he sees that I read his text, but did not yet respond, he gets angry and even a little hostile with some not so nice texts. He is also hard on our kids and expects them to love football, like he did. Frankly, I think this time away will be good for him. He needs to learn to chill the F out. He is obsessed with winning, which put him and us in this mess. He multitasks like 100 things at once. Look, we have plenty of money. He didn’t need to do this. He just likes to win and he never seemed satisfied. Work for him is a game, nothing more. He took it too far.”

Every thing she said seemed to come from a passage I read in Dr. Friedman’s book, Type A Behavior: Its Diagnosis and Treatment. Friedman wrote, in summary, that free floating hostility exists in Type A personalities, and can be triggered by minor events, like time urgency, impatience and a competitive drive.

I have many Type A personality traits. I can be impatient, self-critical, competitive, and by any measure, I am ambitious. My point, obviously, is that one must be fully aware of these types of traits in prison. By now you all know, I do not play the scare game. Not my style. Prison can be a phenomenal experience. But again you must be fully aware of all of your idiosyncrasies, mannerisms and tendencies. If you don’t you will imperil what should be a productive time away from home. Had this doctor better understood how his Type A personality influenced his prison term, he would not have returned to his cubicle to find urine in his sheets.

My new client is surrendering to Taft Camp, where I served time. I will take the initiative to introduce him to my clients at Taft, including David Applegate, presuming he is committed to investing the time to work through my lesson plans and processes our team has put in place. Then again, based on his traits, I have no doubt about his willingness to work.

Other than all this prison talk, I feel like I am back at USC and just wrote a paper in my Psychology 101 class.

P.S. Our sentencing calculator can help ensure you pick the best prison and surrender on the day that will ensure you serve the shortest sentence. Check it out here.

P.S.S. Of course, my new client gave me permission to share this story. In fact, he and his wife encouraged me to write it. 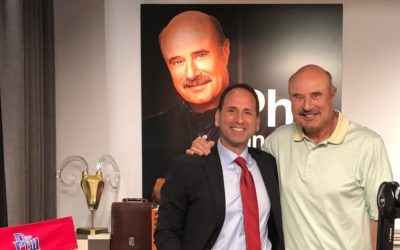